Protective accompaniment is a strategy pioneered by PBI for protecting human rights defenders and communities whose lives and work are threatened by political violence.

PBI sends teams of volunteers backed up by an international support network to accompany human rights defenders and communities in areas of conflict.

Since 1981 PBI has protected the lives on hundreds of organisations and communities in 11 countries. Our presence has enabled them to continue and expand their work with greater confidence despite threats because of the feeling of greater security and moral support provided by PBI volunteers from more than 30 countries. Groups we have accompanied include indigenous communities, environmental organisations, lawyers, women’s organisations, trades unions, and relatives of the disappeared.

Accompaniment has proven to be very effective protection, even where the overall human rights situation was deteriorating and where death squads seemed impervious to external pressure. Since 1981 PBI has successfully protected the lives of thousands of activists while never losing a volunteer.

What difference does accompaniment make? 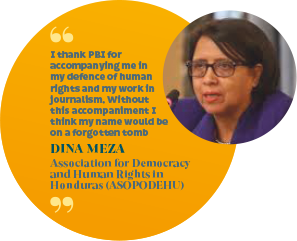 Protective accompaniment has three simultaneous and mutually reinforcing effects. The presence of international volunteers protects threatened activists by raising the stakes for potential attackers. It provides moral support and international solidarity for civil society activism by opening space for threatened organisations thereby giving them the confidence to carry out their work. In addition it strengthens the international movement for peace and human rights by giving accompaniment volunteers with a powerful first-hand experience that becomes a sustained source of inspiration to themselves and others upon their return to their home countries.

The accompaniment volunteer is the embodiment of international human rights concern, a compelling and visible reminder to those using violence that their actions will have repercussions nationally and internationally. When the level of threat is high accompaniment is sometimes round the clock. In other situations volunteers stay with threatened communities or remain in the offices of organisations, and accompany threatened activists when they travel. Another form of accompaniment is regular phone calls to organisations to check on their safety.

The premise of accompaniment is that there will be an international response to whatever violence or potential violence the volunteer witnesses. Behind such a response lies the implied threat of diplomatic and economic pressure—pressure that the sponsors of such violence prefer to avoid.

Victims of human rights abuses are frequently those attempting to organise for social justice, nonviolence and respect for human rights thus challenging the interests of powerful elites. An international presence can be a source of hope. It assures activists that they are not alone, that their work is important and that their suffering will not go unnoticed by the outside world. Thus the volunteer’s presence not only protects, but also provides moral support for the growth of civil society activism in repressive situations.

Every accompaniment volunteer returns home inspired by the privilege of having been able to contribute to protecting and providing moral support for the work of the human rights activists and communities they have accompanied.

How does accompaniment work? Why is it effective? 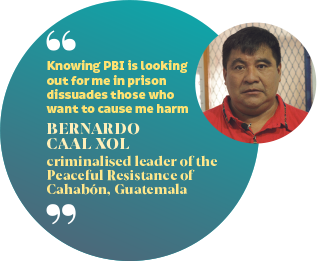 International accompaniment can succeed in deterring attacks because the decision makers behind these attacks do not want a bad image internationally. They do not want the world to know what they are doing. They do not want to be made to feel uncomfortable by diplomats discussing human rights problems in their meetings. They don’t want to read in the international press that they are being called to account for human rights abuses. Accompaniment increases the perceived political costs of ordering an attack in front of international witnesses—witnesses whose organisation is committed to making such attacks as costly as possible for those responsible.

Accompaniment protection and the line of command

In the more traditional model of international human rights pressure is usually directed at the top at the same time as providing other forms of support for threatened activists. However, systematic human rights abuses require the collaboration of players in lines of authority at local, national and international levels. PBI's approach is multi-layered in that it seeks to influence every point in this chain.

"PBI has helped us to maintain the level of our work especially in investigating cases in regions where because of security risks we would otherwise have been unable to travel. It has meant we have been able to stay in the country rather than go into exile… there have been no lethal attacks against us while PBI has been present. Accompaniment also increases respect in our dealings with the authorities. When I go out to do legal work my family asks me ‘Is PBI going with you?'

In addition to physical accompaniment, PBI is a witness to the reality we face and a valuable source of reliable information…PBI volunteers continue to be ambassadors when they return to their home countries and this represents a globalisation of solidarity for human rights."