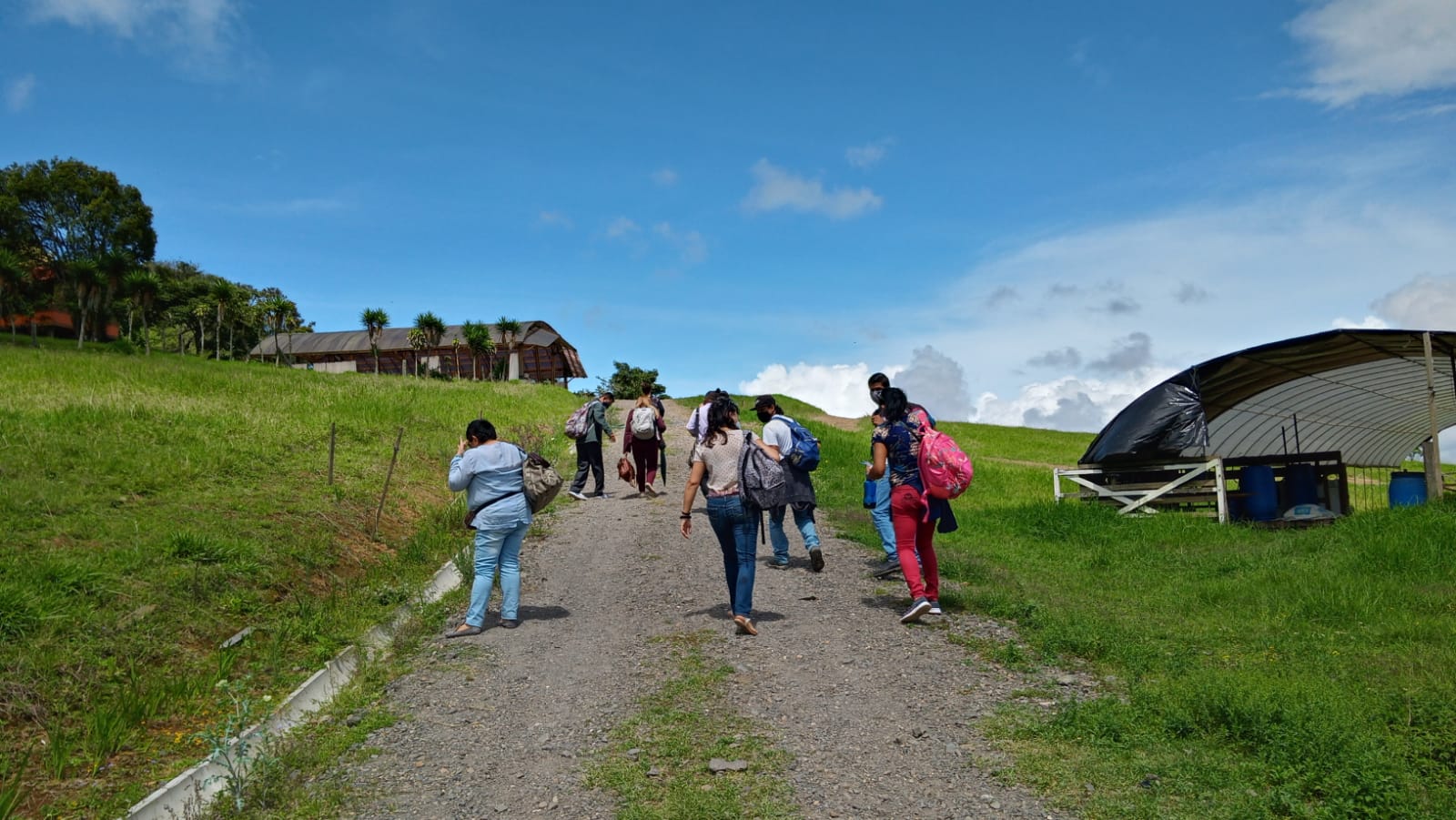 Latin America and the Caribbean is a region where there have been and continue to be large migratory flows originating from economic factors such as inequality and poverty, unemployment, a lack of opportunities for integral human development, as well as social factors resulting from the insecurity generated by the violence of organized criminal gangs and drug cartels.

Factors such as the repression and terror of military dictatorships are also influential, as is forced displacement as a result of war, such as those in Colombia and Central America in the 1980s, and more recently, the political violence produced by police states such as Venezuela and Nicaragua.

Although the largest migratory flow has historically been in a South-North direction, mainly from Mexico and the Northern Triangle to the United States, there is also record South-South migration between countries in the region. For example, in the Caribbean, from Haiti to the Dominican Republic, and in Central America, from El Salvador and Nicaragua to Costa Rica and Panama.

In South America these waves have been registered from Bolivia and Peru to Chile, from Paraguay and Uruguay to Argentina, and from Venezuela to several countries in the region, in what is the largest South-South exile on record in the last two decades.

This brief article will lay out what Nicaraguan migration to Costa Rica has been and is like. It will begin with a specific account of the main benchmarks that have marked this migration, a few characteristics that differentiate some migrations from others will be described and, finally, we will briefly recount this latest political migration and the challenges migrants face in integrating in the country.

Migration from Nicaragua to Costa Rica has a long history. Sociologist Catalina Benavides addresses this in her article entitled “Costa Rica: retos de integración de la inmigración política nicaragüense de 2018” where she explains that this migration can be analysed from five main conjunctures:

Contexts of spikes in greater migration have also been registered, such as the 1972 earthquake and the uprising against the Somoza dictatorship at the end of the same decade.

Or, for example, in 2018, following the “clean-up operation” in which the Ortega and Murillo administration used paramilitary groups armed with weapons of war to remove the roadblocks that had been installed to pressure their departure from government.

And, more recently, with the imprisonment of the main contenders disputing the government’s power, and the definitive closure and cancellation of free and transparent elections to achieve democratic change.

Before speaking of these situations, it should not be noted  that this migration has mainly been a response to the forty-year promotion of an economic model in which, on the one hand, Costa Rican economic sectors require low-skilled Nicaraguan labor to cover a human resources deficit in sectors such as agriculture, construction, and services and, on the other hand, in which this is an alternative to the bad social, economic, and political conditions of Nicaragua.

Although the motivations behind migration may spring from a variety of reasons, it cannot be ignored that these decades have been principally marked by a relationship of transnational labor migration.

Later we will return to this point. First, we will focus on political migrations.

Costa Rica’s political stability is one of the reasons why dozens of Nicaraguans, forced to leave Nicaragua during the Somoza dictatorship, preferred to settle there instead of going to Honduras or El Salvador.

One of the standout characteristics at that time was the presence of important Nicaraguan figures: writers, musicians, poets, theologians, academics, and emblematic figures of Nicaraguan politics.

In addition, during this first chapter in Costa Rica, groups of internationalist struggle emerged in solidarity with the Nicaraguan people, the product of an international discourse framed within the Cold War and in the ardour of political positions.

The book “Los amigos venían del sur” by writer José Picado Lagos, stated that some 350 Costa Ricans actively participated with the Sandinista National Liberation Front (FSLN) forces in the 1970s, in the Southern Front, and as part of the Carlos Luis Fallas Brigade and the Mora y Cañas Brigade. Later, others faced off against the counter-revolutionaries supported by the United States government in the eighties. Many of those ties remain active to this day.

On the other hand, in the thesis entitled “Refugiados centroamericanos en Costa Rica: El aporte del Gobierno durante el Proceso de Paz 1980 – 1995” by Inés Guerrero Sirker, it is explained that since the beginning of the armed conflicts of the eighties in Nicaragua, El Salvador, and Guatemala, more than 250,000 Central Americans have left their countries of residence and received timely protection and assistance as refugees in neighbouring countries, with the participation of the Office of the United Nations High Commissioner for Refugees (UNHCR).

These were very difficult years for Nicaraguans because there was a great deal of repression from the revolutionary government of the Sandinista front, which controlled the entire country and persecuted opponents. At the beginning of this decade, 35,000 Nicaraguans were recognised and served as refugees. In the 1984 Costa Rican census, more than 84,000 foreign-born people were registered, of whom almost 46,000 were of Nicaraguan origin.

This influx of Nicaraguans into Costa Rica was caused by political repression, but also by the economic crisis. Not a lot of information is available on the characteristics of this political migration, but the migration of the 1980s after the triumph of the Sandinista revolution symbolised the breakdown of the Nicaraguan social fabric as a result of the civil war.

In the 1990s, the story was a bit different. According to an IDB report, from 1990 on, the flow of Nicaraguan migrants to Costa Rica increased, mainly motivated by family reunification and the search for employment and better socioeconomic conditions.

What were initially peaceful protests quickly escalated to violent scenarios that led to the forced migration of thousands of Nicaraguans who were forced to seek refuge in Costa Rica.

This political migration has been diverse. Some people entered through official crossing points, others through the mountains and blind spots, some individually, and some in groups, among them youth, students, farmers, and professionals.

But this diversity is also expressed in characteristics that do not fit into the Costa Rican image  of the Nicaraguan “other,” which was built over decades following the economic migration of the 1990s, and which has come to be challenged by this new heterogeneous migration where students and professionals stand out.

On this matter, we wish to explain further.

Challenges for the Integration of “Blue and White” Asylees

Beyond the organising work and diversity of political proposals that characterise the “blue and white” asylees—that is, the last generation of Nicaraguan asylees—there is a more everyday issue that directly influences the social and cultural integration of this population in Costa Rican society.

To begin, we will return to what we mentioned about the forty-year economic model promoted in Costa Rica. This is a factor that has completely influenced labour supply. In this regard, surveys conducted by the University of Costa Rica show that 71% of Nicaraguan immigrants are employed in the following sectors: agriculture (26%), construction (16%), commerce (15%), and manufacturing (14%).

These percentages demonstrate a profile of migrants whose labour is absorbed in low-skill occupations. This corresponds to their level of schooling since most have an educational level between primary and secondary school.

This means that the Costa Rican labour market is not prepared to absorb migrants with a profile of higher education levels, since many people are professionals or university students. Furthermore, the possibilities of obtaining a job commensurate with the needs and expectations of these migrants is complex and very difficult because the job options offered by this market have lower qualifications, based on historical economic relations.

Furthermore, many refugee applicants perceive exclusionary narratives from Costa Ricans, since they do have Nicaraguan characteristics, such as their accent and physical appearance, and they are confused with Venezuelans or Colombians.

Another issue that may influence the integration of this population lies in the desire to return. Unlike economic immigrants who envision a life project in Costa Rica, refugee applicants yearn to return to what they feel was taken from them. 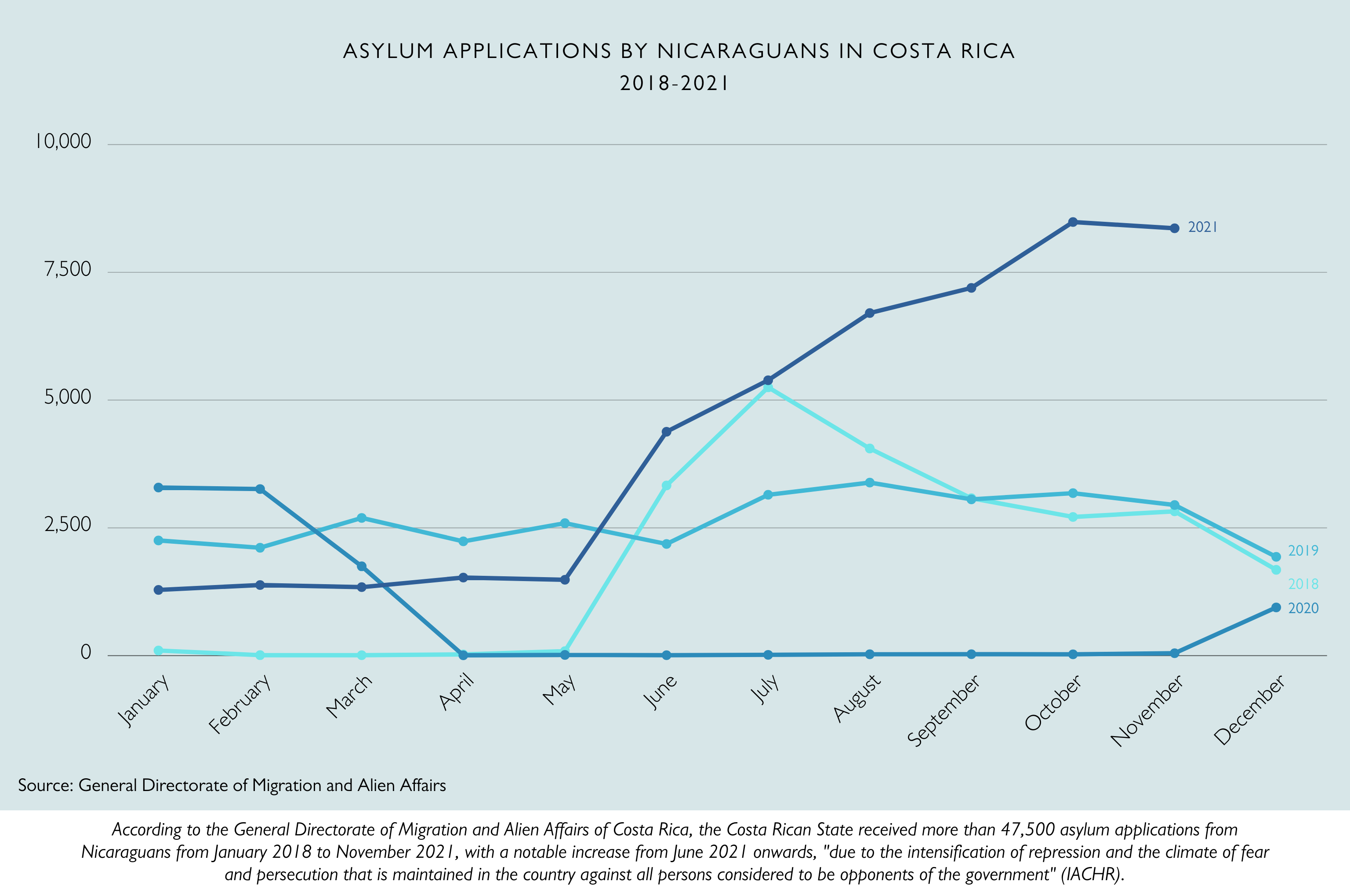