PBI Nepal produce thematic publications on issues relevant to human rights defenders in Nepal. These can be downloaded below. 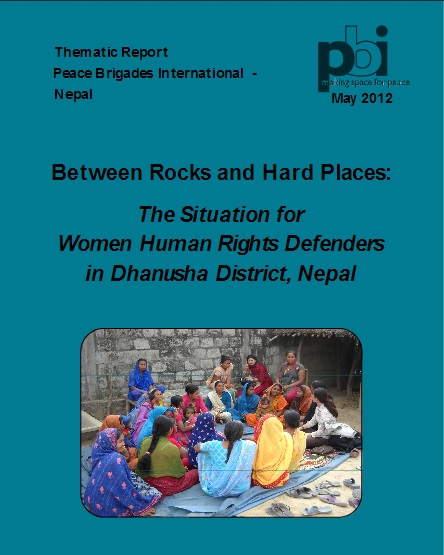 In ‘Between Rocks and Hard Places’ PBI Nepal closely examines the obstacles that WHRDs in Dhanusha face by looking at the nature of threats, gendered abuse, and the impact of a lack of legitimacy in the eyes of the authorities. The report gives insight into how WHRDs perceive challenges and serves as a platform through which their voices can be heard. Whilst the report is geographically specific, the challenges faced by the WHRDs in Dhanusha district will find reflections in many other parts of Nepal.

At the end of 2011 and beginning of 2012, PBI undertook three specially funded field trips to Siraha, Saptari and Dhanusha, districts in the Eastern Terai of Nepal. The socio- economic structures in the districts have created enduring conditions disposed to conflicts and tension.

The culture of impunity in Nepal related to conflict-era crimes continues and affects present-day access to justice. There is an absence of rule of law in many areas and rising insecurity as a result. Human rights defenders working against impunity or within this environment are made vulnerable. Here PBI-Nepal's partners and volunteers describe the situation and the effects on human rights defenders.

Nepal will undergo a review of its human rights situation at the 10th session of the Universal Periodic Review in January 2010. This 7th edition of Namaste focuses on 5 recommendations based on the need to respect and protect HRDs, including women HRDs and journalists. Articles explain in more depth the situations HRDs face which have led to the specific recommendations being made.

In this 6th issue of Namaste PBI wishes to bring your attention to the topic of discrimination in Nepal. Despite improvements in the Interim Constitution of 2007, discrimination is still present in many laws.

This special issue of the Namaste presents the talking head video 'we are not giving up', a compilation of interviews done by the PBI Nepal teams to 7 human rights defenders.

In this fourth and last 2009 edition of Namaste, PBI would like to draw attention to its accompanied organisations and individuals, all of whom contributed to an interesting year for the PBI team.

In this third edition of Namaste, PBI would like to draw attention to the issue of torture in Nepal, the lacking legal framework and the hardships faced by Advocacy Forum’s (AF) lawyers when visiting detention centers.

In this second edition of Namaste, PBI would like to draw attention to the situation of victims of the conflict, with a special focus on Bardiya district, in midwestern Nepal, which saw the highest number of disappearances during the conflict. PBI Nepal has had a permanent presence in Bardiya since April 2009.

In this edition of Namaste, PBI would like to emphasise the worrying situation of journalists in Nepal. The high level of impunity for past and ongoing abuses continues to be the norm, and this contributes greatly to the current insecure situation in Nepal.