Peace Brigades International expresses its deepest concern about the serious violations of Human Rights that are occurring in the context of the war in Ukraine and the escalation of the conflict.

"As an organization committed to peace, nonviolent conflict resolution and an end to militarization, we add our voice to those calling for an immediate end to this war."

The Office of the United Nations High Commissioner for Human Rights (OHCHR) recorded 1,761 civilian casualties (636 killed, 1,125 injured) in Ukraine from February 24 (when the russian aggression began) to March 13. The OHCHR has stated that it "believes that the real figures are considerably higher".

Despite the call of the UN Secretary Antonio Guterres for the "immediate cessation of hostilities and serious negotiations based on the principles of the UN Charter and international law", many countries have responded to the crisis by exporting weapons and military equipment to Ukraine, and promising to increase military spending. We are concerned that this initiative could perpetuate armed conflict and suffering for the civilian population worldwide. Likewise, we are concerned that under the slogan of "security", countries and armies that perpetrate serious human rights violations and crimes against humanity are recognized as "important allies" of NATO.

In a scenario of international polarization, the stigmatization of pacificism is alarming

We deplore that over 14,000 anti-war protesters have been arrested in Russia since the war began. We also hold concerns around the March 4th passing of a new Russian law making anti-war demonstrations and independent reporting on the war and army illegal, with sentences of up to 15 years in prison. We are also troubled by the punishments applied by both Russia and Ukraine to conscientious objectors and fear for the situation of human rights defenders both in Ukraine and in Russia.

"From PBI we call on all parties, in particular political leaders and the media, to take extreme care in their language during public speeches, and in particular, to explore all possible diplomatic channels for the construction of peace." 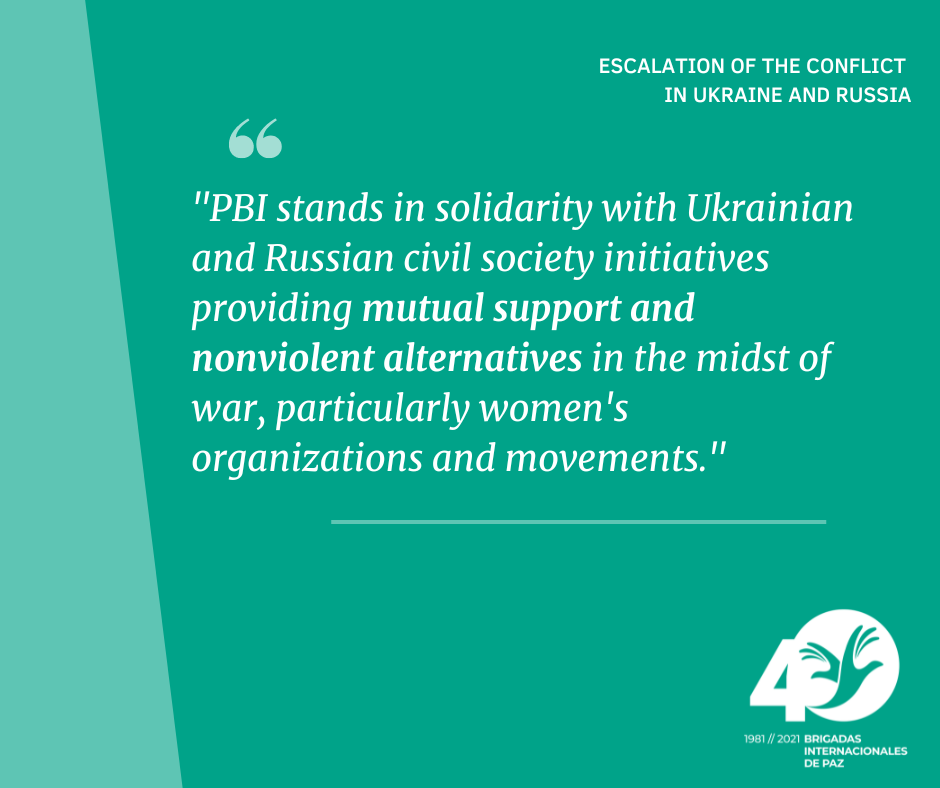