Celebrating the power of non-violence

October 2 marks the International Day of Non-Violence and the birthday of Mahatma Gandhi. The UN General Assembly began commemorating this day in 2007 to raise awareness and educate the public on the principle of non-violence. The goal of the resolution is to ensure a “culture of peace, tolerance, understanding and non-violence.”

Mahatma Gandhi is an icon for leading India to independence from the British Rule by protesting through non-violent means. Gandhi inspired a culture of civil rights practices such as peaceful marches and hunger strikes in contemporary history. Martin Luther King Jr. is a notable figure who took inspiration from Gandhi’s philosophy of non-violence during the Civil Rights Movement in the United States during the 1950s and 1960s.

In PBI the philosophy of non-violence provides the foundation for our work. We are convinced that enduring peace and lasting conflict resolution can only be achieved through peaceful means.  In this respect we reject violence of any kind and from any source. We encourage dialogue and transparency to create conditions of trust required to build peace. PBI’s endeavor is to overcome injustice and violence in order to build peaceful societies where human rights are protected, respected and fulfilled, by ensuring that those who defend human rights are protected.

In practice, PBI rejects any armed accompaniment and only supports organisations and individuals who live by the same principle. In addition, PBI works through consensus, applying a horizontal structure across the whole organization.  We understand this as non-violence in practice, as we encourage participation, dialogue and transparency to prevent conflicts and encourage collaboration.  This allows us to be coherent with our internal decision-making processes and our principles and convictions.  Everyone who passes through PBI receives training in order to fully participate in the organization’s structure, so they understand the importance of non-violence in decisions in their daily lives, how to treat each other and live in community.

PBI has provided support to human rights defenders in protecting their spaces of work through non-violent means. An example of this is PBI’s work in Colombia with the Peace Community of San José de Apartadó. PBI has been accompanying the Peace Community since 1999. 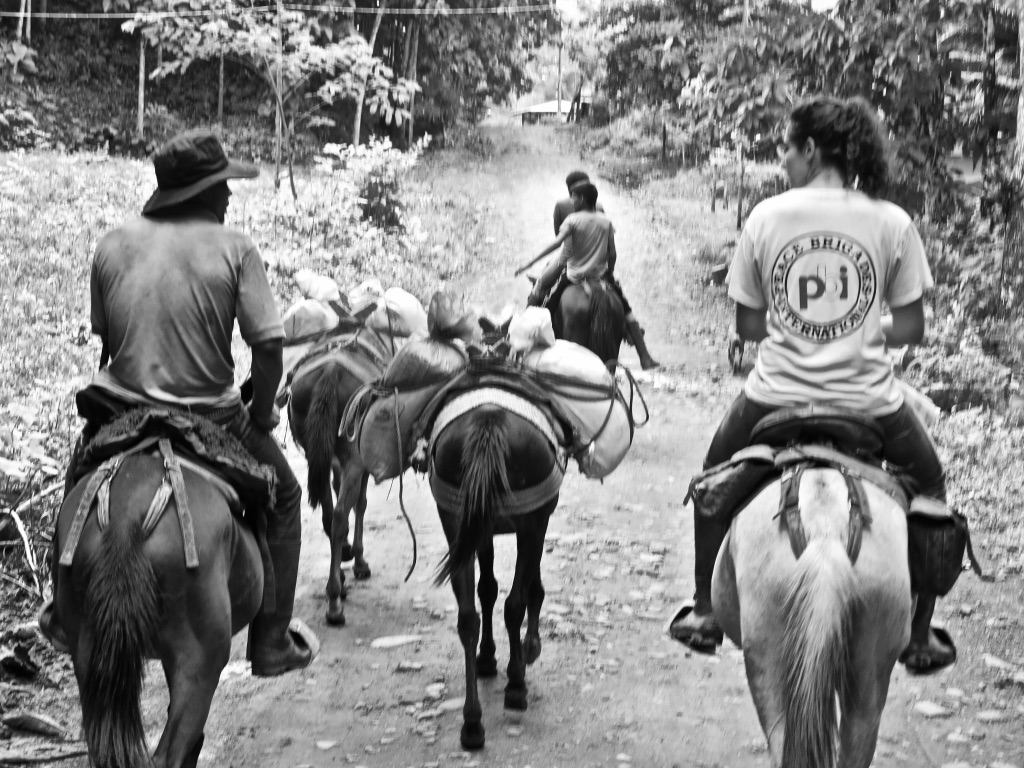 The story of the Peace Community in Colombia rose from violence that persisted in the region of San José de Apartadó. Apartadó is a strategic location as it is in the subregion of Urabá in Northeaster Colombia. In this region, the climate is humid all year round and cash crops such as bananas, plantain and cocoa have made it a location of economic interests to guerrilla groups, paramilitary forces, the national army and private companies. Those who find themselves in the middle of the conflict between these actors are the most vulnerable communities who have been most impacted by the violence.

Conflict began when armed actors forced the displacement of the farming community. But in 1997, this farming community initiated the Peace Community of San José de Apartadó and declared itself neutral in the armed conflict, rejecting the presence of armed groups in the territory and refusing to support them in any way. .

Since then, the Peace Community has faced numerous threats and attacks against their sovereignty and principles. The worst massacre they faced was in 2005 where eight people were murdered, seven being members of the Peace Community. Non-violent struggle does not always encourage the same treatment in return. Both Gandhi and King were both assassinated for their activism.

Today, despite the constant risk and continued challenges, people in the community have been able to remain on their territory, farming crops such as cocoa and exporting them to European countries. The presence of PBI provides international support in the form of solidarity and political support networks which can be activated to ensure their protection.