The journalism crisis in Nicaragua 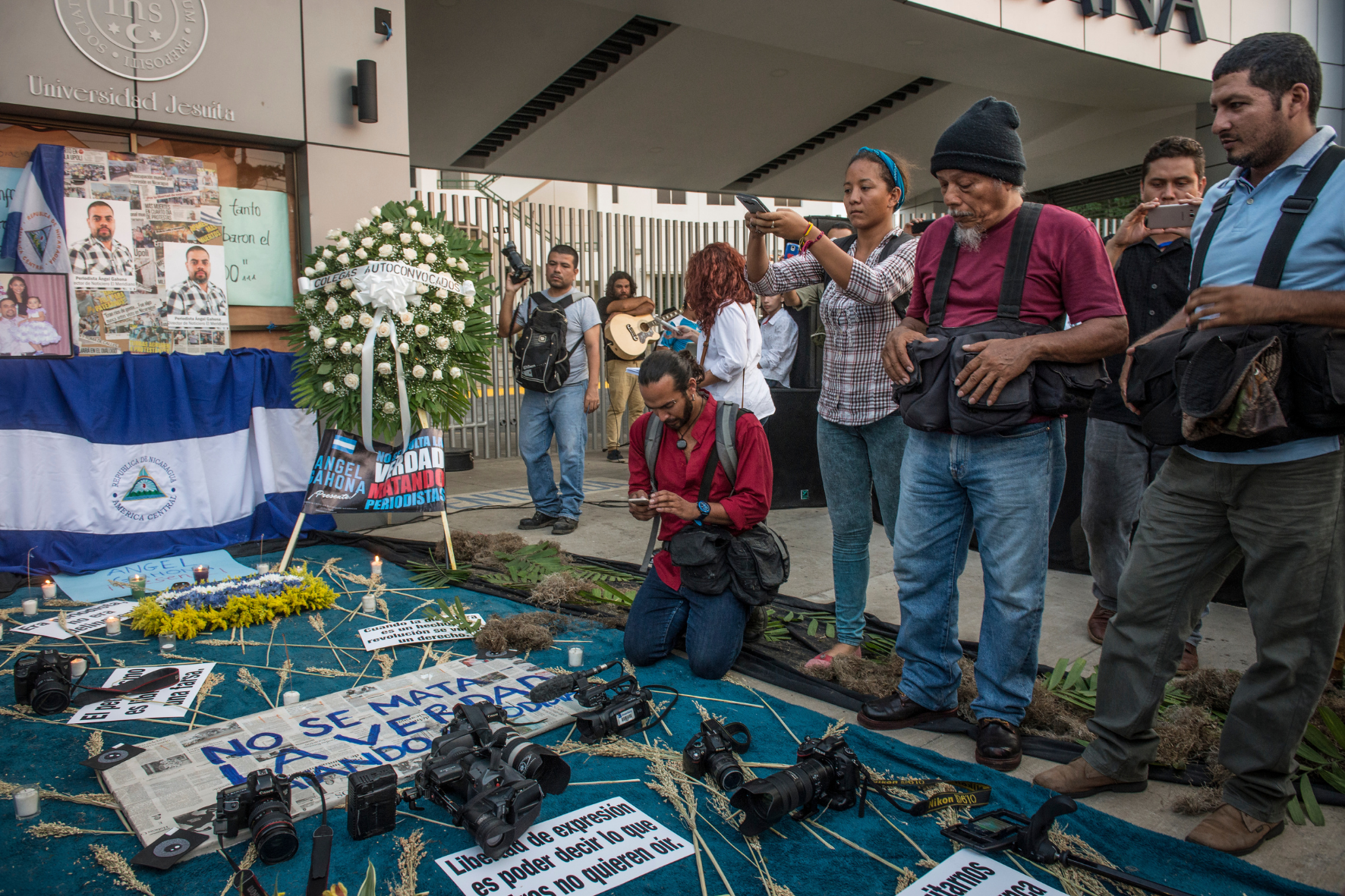 Nicaragua’s sociopolitical crisis has upended society in this small country. It has impacted everyone, from “regular” citizens to the business and political sectors, including people who work in any area, but especially doctors, lawyers, and journalists.

Journalists are one of the groups most persecuted by the Daniel Ortega government, according to an Inter-American Commission on Human Rights (IACHR) report published on 28 October 2021 on Nicaragua.

The crisis faced by independent press in the Central American country is reminiscent of 2007, after Ortega won a contested election, and current Vice President Rosario Murillo announced that she would implement a governmental strategy to ensure “uncontaminated information.”

At that point, Ms. Murillo coordinated the Nicaraguan government’s Communications and Citizenry Council, in charge of disseminating “uncontaminated” information originating from state institutions.

Thus, any journalist who needed state or governmental information was required to listen to the daily noon speech, given that state employees were not allowed to provide information about their work to non-state outlets.

Furthermore, the family in government began to acquire media outlets such as broadcast television Channels 8, 13, and Channel 2, a group of radio stations throughout the country, and platforms such as El 19 Digital, Juventud Presidente, and Barricade.

The Ortega administration began to distribute state publicity through pro-government outlets alone and avoided positioning publicity on independent media outlets at any cost.

During the 2018 citizen protests, being a journalist became even more dangerous. On 21 April 2018, journalist Ángel Gahona—director of the news program, El Meridian—was killed. Gahona was shot in the head while live streaming on Facebook the protests that were taking place that night in the city of Bluefields.

Gustavo Mohme, then president of the Inter-American Press Association (SIP), expressed his consternation and condolences to the journalist’s family and colleagues. He publicly requested that the authorities investigate the incident, while (also) placing responsibility on disproportionate repression from state security forces.

This news contradicted the official discourse that “everything is fine in Nicaragua.”

As the repression against protests intensified, the Daniel Ortega government looked for guilty parties to blame for what happened.

This was how the government came to circulate its version that the protesters themselves were guilty of the protest deaths and Murillo accused them on national television of being “coupist” and “terrorists.”

This is also when the first wave began of journalists going into exile. According to Periodistas y Comunicadores Independientes de Nicaragua (PCIN - Independent Journalists of Nicaragua) about 60 media workers were forced to leave Nicaragua between 2018 and 2019, mostly going to Costa Rica and El Salvador.

The night of 21 December 2018 was channel 100% Noticias’s turn. This was the night that director Miguel Mora and press director Lucia Pineda were jailed.

Carlos Fernando Chamorro and part of his team had to go into exile in Costa Rica, where they continued reporting thanks to collaboration from Costa Rican television channels.

“Concentrating power in the hands of the Executive has made it easier for Nicaragua to become a police State in which the Executive suppresses all liberties through citizen control and surveillance and through the use of State law enforcement agencies and para-State groups, with the acquiescence of the remaining branches of government and oversight institutions,” according to an official press release from the IACHR, 28 October 2021.

IACHR representatives confirmed the repression in Nicaragua in 2018 based on a visit from its executive secretary, Paulo Abrao. This led to the creation of the Special Monitoring Mechanism for Nicaragua (MESENI) on 24 June 2018, which confirmed more than 328 deaths, over 2,000 injured people, and at least 800 political prisoners during that year’s protests.

The entity affirmed that there were “serious human rights violations” in the country.

It also stated that “Nicaragua’s greatest challenge now involves restoring the fundamental liberties and safeguards of a democratic State where rule of law prevails, to enable the restoration of representative, participative democracy and of an effective separation of powers.”

However, this seems impossible in a Nicaragua where the passage of three laws and a Constitutional reform were rammed through to allow for the indefinite imprisonment of journalists who report repressive government policies, warned Amnesty International.

Amnesty International is referring to a “trio of laws” approved at the end of 2020: the Law to Regulate Foreign Agents (Law 1040), the Special Law for Cyber Crimes (Law 1042), and a reform to the Criminal Code to apply life in prison to those accused of committing “hate crimes.”

Arrests and the Closing of Non-Governmental Organisations

Last 5 February 2021, the Foundation Violet Barrios de Chamorro—a civil society organisation focused on defending and strengthening freedom of expression and information in Nicaragua—had to close its operations when the Law to Regulate Foreign Agents came into effect, as it forced the country’s non-governmental entities to register before the Public Ministry as “foreign agents” and be investigated. The investigation determines if the person and/or organisation fulfills the characteristics of being a “foreign agent that undermines independence, sovereignty, and national self-determination.” The fine for breaking this law is between $500 and $500,000.

Based on this decision, the Fundación Violet de Chamorro is now under investigation for alleged “money and assets laundering.”

Cristiana Chamorro, journalist, former director of that NGO, and pre-candidate for president of the republic—the most popular candidate opposing Ortega, according to the CID Gallup polls—has been under house arrest since last 2 June.

Cristiana had a 21% popularity rating before her arrest, the highest among the opposition presidential pre-candidates, who in total had 46% against Ortega’s 33%, according to the polling company CID-GALLUP.

On 20 June of the same year, she was jailed again along with presidential pre-candidate Miguel Mora, who would become the elected candidate of the Partido Restauración Democrática (PRD - Democratic Restoration Party). Mora and Chamorro would come to be part of a list of seven opposition pre-candidates jailed by the authorities before the elections on 7 November.

On 21 June, sportswriter and tweeter Miguel Mendoza was arrested. He is under investigation by the Prosecutor’s Office for “actions that undermine independence, sovereignty, and self-determination, inciting foreign interference in internal affairs, calling for military interventions, organising with financing from foreign powers to carry out acts of terrorism and destabilisation, proposing or managing economic commercial blockades and financial operations against the country and its institutions, demanding, exalting, and applauding the imposition of sanctions against the Nicaraguan State and its citizens, and harming the nation’s supreme interests.”

“The speed with which the Ortega government has carried out this wave of arrests before the November presidential elections, subjecting its critics to horrific conditions of detention, and accusing them of crimes without basis or due process, reveals that Ortega does not have the slightest intention of losing the next elections,” said José Miguel Vivanco, director for the Americas of Human Rights Watch (HRW).

In addition to the 42 arrests carried out between the end of May and mid November 2021, Nicaraguan human rights organisations stated that another 114 people perceived as critics had previously been arrested and were still being held in August. Many have been under arrest for over a year and face abusive detention conditions, as HRW also indicated.

A difficult year for the Nicaraguan press

The organisation of media workers also registered 1,176 attacks against press freedom and access to information during the same time period. The attacks occurred most predominately in the regions of Leon, Managua, Masaya, Carazo, Rivas, Madriz, Matagalpa, Estelí, New Guinea, and Bluefields.

Meanwhile, the Colectivo de Derechos Humanos Nicaragua Nunca Más (Human Rights Collective Never Again Nicaragua) has registered at least 30 journalists who “have been criminalised and prosecuted” in Nicaragua due to their work. According to this organisation, at least 25 journalists and media workers have had to go into exile, the majority in Costa Rica  (information up to November 2021).

Similarly, in the electoral context, PCIN reported at least 54 attacks against men and women from the press between 25 October and 7 November in Nicaragua.

Seventeen of the attacks occurred when journalists tried to enter polling stations which, according to the observatory of Urnas Abiertas (Open Ballot Boxes), underwent surveillance from “state and para-state officials.” In the city of Masaya, two journalists, Mileydi Trujillo and Elvin Martinez, were arrested. Both are from the digital outlet Masaya al Día. Another two individuals in exile experienced threats against themselves and their families.

As can be seen, the Ortega government has used several methods to silence public opinion and any voice that opposes its ideas and policies. These initiatives are contrary to freedom of expression, a fundamental element to build a peaceful, democratic, and just society. Journalists are an integral piece of the architecture necessary for the effective enjoyment of human rights. They are human rights defenders, and their work faces ever greater risks.

Despite these circumstances, Nicaraguan journalism has been strengthened through unity and collaboration among different information platforms, independent journalists, and media outlets. The best example of this is the creation of PCIN on 1 December 2018. This organisation brings together 248 journalists inside and outside of Nicaragua. PCIN also has chapters in El Salvador, Costa Rica, and Spain, the principal exile destinations for media workers.

Also, at least 23 information platforms and programmes were created from exile in Costa Rica, where 56 journalists, communications professionals, and multidisciplinary teams are working. Of those people, 64% are men and 36% are women, according to research on exiled journalists.

The communications outlets outside of Nicaragua have become a bastion of independent press, which day by day exercise the right to report; a right that has been taken away in Nicaragua, but outside of its borders, has been able to prevail.