The UN’s World Day of Social Justice is coming up on the 20 February. The UN notes that: ‘We uphold the principles of social justice when we promote gender equality or the rights of indigenous peoples and migrants’ and that: ‘social justice cannot be attained in the absence of peace and security, or in the absence of respect for all human rights and fundamental freedoms’. 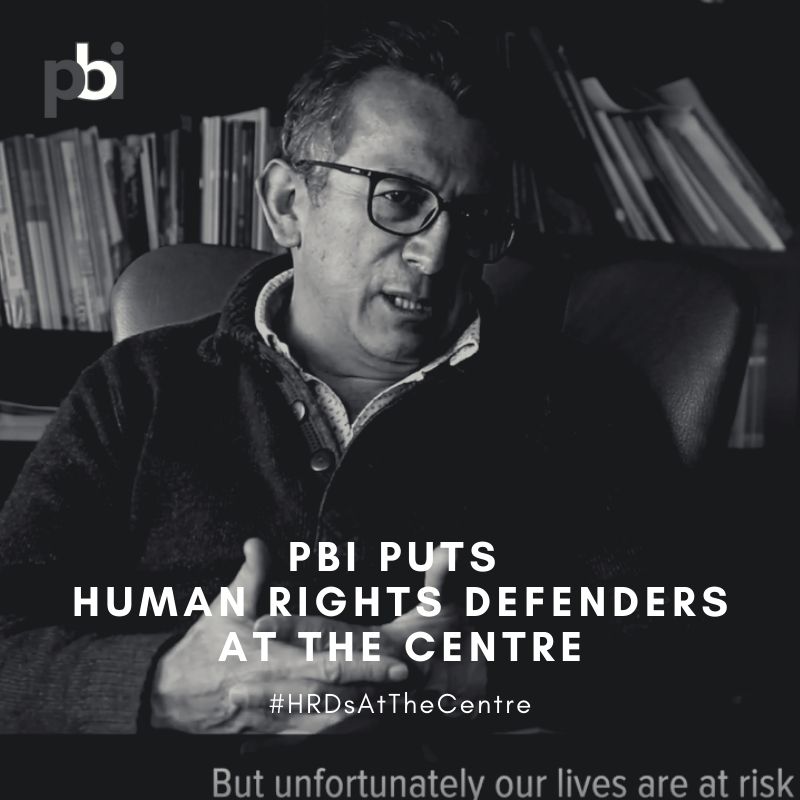 Daniel Prado is a Colombian human rights lawyer.  He’s currently working on the case against the former President’s brother, Santiago Uribe, for homicide and heading a paramilitary group, the “Twelve Apostles”. Prado is considered at grave risk because of his work and the important interests that he often confronts.

In an interview with PBI Prado says he was motivated by his father who ‘instilled in us principles about the right way to act and the values that one should have’, he was also inspired by Eduardo Mana Mendoza, founder of the Alvear Restreppo Lawyers Collective, an NGO defending human rights and fighting impunity. Eduardo Mana Mendoza was killed in 1988 and those responsible for his death have never been brought to justice: ‘he was a person with a lot of clarity and that cost him his life’.

Prado’s work on this began in 2000 when he took up the case of two students who had been forcefully disappeared. He found a link to a paramilitary group in Antioquia and links between this group and the Uribe family. He also took on an investigation in to the Camp Massacre case in 1990 when ‘a family was killed and some children left alive in a really cruel way’. Again, he found links to a paramilitary group in Antioquia.

Looking further into the affairs of the Uribe family he was contacted by a police officer who had collaborated in the operations of the Twelve Apostles. The officer was taken to Argentina to report as witnesses in key cases such as this are often killed in Colombia. Indeed in in November 2017 a plan was uncovered to murder Olwan de Jésus Agudelo Betancurt, one of the witnesses in the case. The case has finally reached trial and Santiago Uribe is detained.  Prado believes the Twelve Apostles are responsible for around 509 homicides and disappearances.

In 2017 Prado was granted precautionary measures by the Inter-American Commission on Human Rights (Medida cautelar N° 261-16 of 20 November 2017), which stated that ‘the rights to life and personal integrity of Mr. Daniel Ernesto Prado Albarracín are at grave risk’. He believes he’s in danger and that something could happen at any time because:  ‘there is no serious policy on the part of the state to ensure the defence and dignity of human rights defenders’.

Prado says he has: ‘tried to lead a normal life but the kids are always worrying’ although they understand ‘it is very important to me as a human being that this country changes and if I can help then it doesn’t matter what could happen to me’.

PBI’s accompaniment at various stages of his professional life has had an important impact: ‘it generates personal, psychological and physical security… if you go alone your attitude is different that if you feel the support of an international organization that is with you’.

PBI supports local human rights defenders so that they can continue their important work despite the huge risk this often implies.  Lawyers such as Daniel Prado fight to ensure that powerful criminals do not escape in the impunity that characterises the country and region.  These types of brave actions ensure social justice prevails in the construction of peaceful, democratic societies.