Returning to their land: Establishing humanitarian zones and biodiversity zones 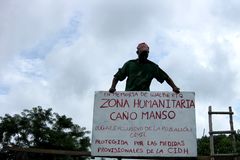 In 2006, the displaced communities from the Curbaradó River Basin began to return under the leadership of Enrique Petro Hernández, a small-scale farmer from the region. Petro donated five hectares of his private property to establish the first Humanitarian Zone in Curbaradó. When the small-scale farming families reached the area, they found that the land seized by the paramilitaries had been turned into large-scale oil palm plantations.1 The first 14 families uprooted the palm trees and constructed temporary housing. As a means of self-protection, these families, and others that were going to return, decided to establish Humanitarian Zones and later Biodiversity Zones. In 2011, the Curbaradó and Jiguamiandó River Basins had eight Humanitarian Zones and approximately 50 Biodiversity Zones

What are the Humanitarian Zones and Biodiversity Zones?

The Humanitarian Zones are a community initiative to continue to resist in the territory despite the onslaught of the armed conflict. In order to achieve this objective, the members demarcate and visibilise the areas they inhabit and prohibit the entrance of any armed actor, whether it be legal or illegal. These zones are based on the principle of distinction between civilians and combatants under International Humanitarian Law (IHL)3 and represent a protection tool for the civilian population living in the midst of the armed conflict. They are also supported through national legislation, including Article 22 of the Colombian Constitution, establishes that "peace is a right". The Inter-American Court of Human Rights has supported the establishment of Humanitarian Zones as a "positive mechanism for protecting the civilian population from actions perpetrated by the different armed actors in the region."4 Biodiversity Zones have also been established to protect the environment and life.

The territories of the Jiguamiandó and Curbaradó River Basins are a part of the collective property granted through Law 70 of 1993 to Afro-descendent peoples.5 According to this law, collective land is non-transferable, imprescriptible, and unseizable, recognising that collective property has an inherent relation to the ethnic and cultural identity of these peoples.6 The collective territories are administered by governing boards within the community councils, which are elected through popular vote by the community members.7

1 "La palma de aceite y la usurpación de territorio a las comunidades negras ", Voltairenet, 9 March 2006. According to the Superintendent of Notaries and Registration[0], 23,000 hectares of collective property were seized by palm oil and livestock companies. Order 448
2 Interview with member of the Inter-Church Justice and Peace Commission (CIJP), April 2011
3 Definition of International Humanitarian Law: Set of rules, established by treaties or custom, applicable in international and non-international armed conflicts, which are also known as the "law of armed conflicts" or the "law of war". Its goal is the reduction of the suffering of victims and the protection of essential resources for their survival, through limiting the adversaries' choice of war methods and means.
4 "Medidas Provisionales respecto de la República de Colombia. Caso de las comunidades del Jiguamiandó y del Curbaradó", Order of the Inter-American Court of Human Rights, 15 March 2005
5 Law 70 of 1993, Official Gazette No. 41.013, 31 August 1993.
6 Ibid.
7 "El Chocó que desconocemos", El Espectador, 22 May 2010